Metal and stone are the most popular plaque materials; however, slate is far easier to polish smooth, colour, engrave and shape. Much like stone, slate must be cut to size and then hand engraved or painted. It’s this time consuming personal touch that often makes it slightly more expensive than other materials. The price will, however, largely depend on the origin. For example, Italian slate can cost thousands per square meter while slate that’s been refurbished can be found for next to nothing.

This guide will examine the benefits and drawbacks of using slate for memorial plaques to help you make an informed decision about which material will best suit your needs.

The Origins of Slate Memorial Plaques

Memorial plaques were first introduced following World War 1, when the British Government awarded circular iron plaques to the families of fallen soldiers. These plaques were not only heavy, but highly susceptible to rust. Not many have survived the turn of the century, as over the years they’ve either degraded or been lost and forgotten through successive auctions.

Stone memorial plaques have been used by the church for over a thousand years to commemorate saints and people associated with the parish. The problem with stone wall plaques is the weight and engraving cost, which doesn’t make them particularly functional. Due to their intricate designs and highly elaborate polishing techniques they are of also often targeted by thieves.

During the 1920s slate plaques started being used by churches and governments as a way of bypassing issues regarding thievery, rust and weight.

The Pros and Cons of Using Slate

Slate is a softer mineral; therefore, it requires a lot less working than stone. This makes it perfect for both large and small memorial plaques. In addition, it can blend in with virtually any surrounding—unlike granite, limestone and marble – and isn’t as susceptible to weathering.

Slate can, however, easily get damaged if dropped or crushed. It can also crack or split if it’s screwed; therefore, slate plaques are usually used as a permanent ornamental feature and rarely moved around. Outdoor slate memorial plaques will eventually build up mould and mildew and will require seasonal cleaning with a solution made from non-ionic detergent and distilled water.

Despite the drawbacks, slate is a good material for memorial gardens and wall fixtures. If used in a garden it should be placed against a tree trunk or stone rather than screwed to a wooden board. Contact adhesive is usually used to keep it fixed in place and will prevent installation damage.

Slate can be up-cycled from old rooftops and flooring, making it the most environmentally friendly material available. Multiple slate tiles can also be strung together to create larger mosaics and truly original works of art. Should the slate get damaged, it can easily be repaired or replaced without the help of a professional stone mason. 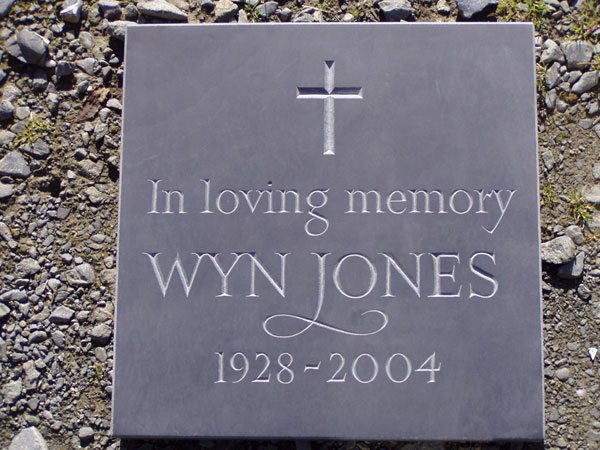 Image Caption: Slate memorial plaques are generally the easiest and most affordable to shape, polish and engrave.